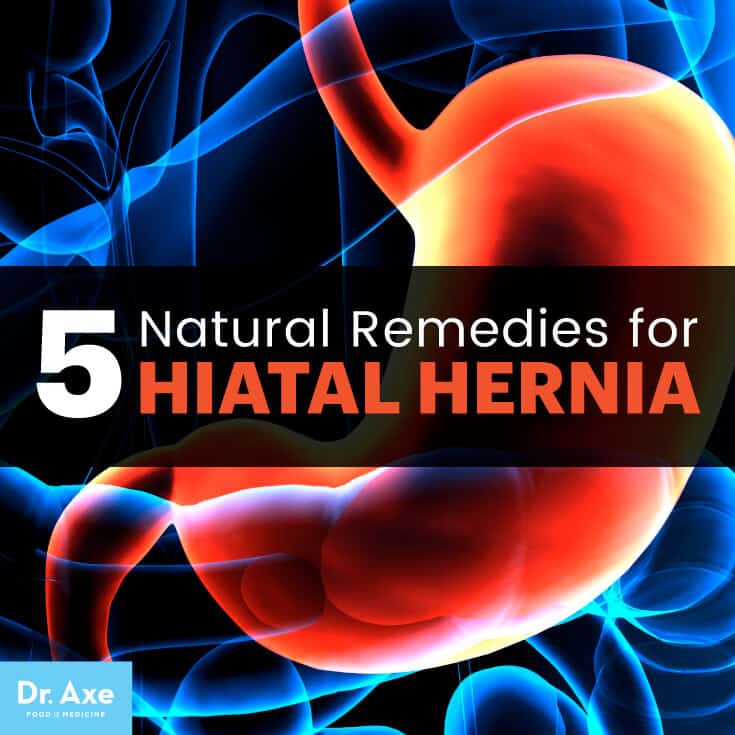 Different types of hernias develop inside different parts of the body, causing an abnormal bulging of one area into another. A hiatal hernia, also known as a hiatus hernia, forms inside the diaphragm, the muscular area that lays between the chest and the lower abdomen. It’s the most common diaphragmatic hernia, with the prevalence rate of hiatal hernia is between 13 percent to 60 percent of all adults. This includes roughly half of those over the age of 50. However, many people with a hiatal hernia have no idea because they never experience noticeable symptoms.

The abdomen holds most of the most important organs of the digestive system. These include the lower part of the esophagus, stomach, small intestine, colon, rectum, liver, gallbladder, pancreas, spleen, kidneys and bladder. When the abdomen experiences injury, lots of pressure, straining or inflammation, then any of these organs can dysfunction. Middle to older-aged women (over 50 years old) develop hiatal hernias more than any other group. The risk only goes up if the woman is overweight, obese, ill due to another disease or pregnant, according to the Cleveland Clinic. (1)

If you’ve talked to your doctor about symptoms of heartburn, anemia, acid reflux or GERD, he or she might have recommended that you should be checked for a hiatal hernia. All of these conditions are related and develop due to similar causes. These causes include eating a poor diet, being overweight/obese, taking certain medications, or high levels of inflammation.

What Is a Hiatal Hernia?

A hiatal hernia is when a part of the stomach pushes into the chest through an opening called the hiatus. The hiatus is part of the digestive system that connects the stomach to the esophagus (also called the food pipe). (2) Officially, there are four types of hiatal hernias. Type I, the most common, occurs when “there is a widening of the muscular hiatal tunnel and circumferential laxity of the phrenoesophageal membrane, allowing a portion of the gastric cardia to herniate upward.” Types II, III and IV also involve the phrenoesophageal membrane and account for 5 percent to 15 percent of all hiatal hernias. (3)

While a hiatal hernia sounds like a pretty painful condition, given that the stomach pushes through an opening in the diaphragm and into the chest, most people with one don’t notice any symptoms.

When symptoms do occur, they include heartburn, acid reflux symptoms or developing a more severe digestive problem called gastroesophageal reflux disease (or GERD for short). Around 20 percent of all adults experience these symptoms on a regular basis, some almost daily.

While many people with hiatal hernia suffer from symptoms of heartburn/acid reflux, the hernia doesn’t seem to directly cause these conditions. Instead, whatever factors contribute to acid reflux (poor diet, inflammation, etc.) also contribute to hernias. Having a hiatal hernia isn’t a guarantee of developing acid reflux or GERD. However, some people have one condition without having the other, but research shows there is often overlap between the two. Additionally, hiatal hernia is common among those with Crohn’s disease.

Common Symptoms of a Hiatal Hernia

If someone does develop signs or symptoms of a hiatal hernia, usually they include chest pain, burning sensations and irritation of the throat. Other symptoms related to acid reflux, heartburn and GERD are also possible.

Symptoms associated with acid reflux include:

More severe symptoms can include:

There are several different types of hiatal hernias. Two are the most common: sliding (the most common type and also the one associated with development of GERD) and paraesophageal. These are also called type I and type II, while type III is a combination of both.

Hiatal hernias occur when muscles surrounding the hiatus opening (which separates the esophagus from the stomach) become weak and stop functioning properly.

The esophageal hiatus is an oval-shaped opening that is controlled by certain ligaments and membranes. These ligaments and membranes are essential in maintaining control of the tissue of the stomach and also stomach contents (including acid). They normally work by sealing off potential spaces between the esophageal hiatus and the esophagus. They open and close depending on if you’ve just eaten something. (4)

When the swallowing muscles and tissues in the esophagus become inelastic, weak, strained or are exposed to too much stress and pressure, stomach acid and parts of the stomach can make their way into the lower esophagus (food pipe). This is why hiatal hernia is associated with heartburn, acid reflux and GERD.

Complications Due to Hernias

For decades researchers believed that GERD and hiatal hernias were practically the same thing. Sliding hernias are most closely associated with acid reflux and GERD.

New insights show that acid reflux/GERD are tied to the same factors that cause hiatal hernia; however, they aren’t the same thing. Factors that contribute to both conditions include: abnormal esophageal acid clearance, tissue resistance, abnormal gastric acid secretion, delayed gastric emptying, and other functional abnormalities of the lower esophageal sphincter (LES). The relation between GERD and hiatal hernia is now referred to as the “two-sphincter hypothesis.” (5, 6)

Over time, if left untreated, GERD can sometimes lead to serious problems like reflux esophagitis, Barrett’s esophagus and esophageal adenocarcinoma (cancer of the esophagus). (7) Because of these risks, experts feel that it’s very important for doctors to investigate if a patient with occasional acid reflux symptoms also has a hiatal hernia and is more likely to experience GERD. The treatment of a hiatal hernia is similar to the management of GERD; lifestyle and dietary changes that help resolve one will also lower incidence and risk for the other.

Surgery might be needed to control complications like stomach bleeding, ulcerations or strictures. These complications are most likely to occur when lots of pressure is placed on the abdomen and digestive organs. Intra-abdominal pressures can be due to chronic or strong coughing, abdominal straining and abdominal compression due to injury, and for other reasons that strain the tissues and organs.

Conventional Treatments for a Hiatal Hernia

Not every person who has a hiatal hernia needs treatment, especially since most don’t experience symptoms or pain. If you do have symptoms, your doctor can diagnose a hiatal hernia by performing an endoscopy test, a pH test, barium swallow scans or X-rays to look for abnormalities inside the esophagus. Once the doctor finds a hiatal hernia, treatments will depend on how severe your symptoms are, if there are any complications that have developed, and how often you deal with pain due to heartburn/acid reflux/GERD. Most of the time treatments are used to control GERD symptoms.

5 Natural Remedies for a Hiatal Hernia

A poor diet can contribute to an overactive immune system, which causes all sorts of painful symptoms. Here are foods that tend to make acid reflux or GERD symptoms worse for many people. Cut down on these if you’ve been diagnosed with a hiatal hernia:

There are also healthy foods that can help improve these symptoms. Include plenty of these in your diet: (9)

Being overweight or obese puts extra pressure on the valves and sphincter that allow release of stomach acid. In addition, obesity is often associated with low levels of stomach acid. (10) In eight of nine studies included in a large review, as BMI (body mass index, a measure of body fat ) rose, so did GERD symptoms. Try to reach and remain at a healthy weight. Eat an unprocessed diet, get more exercise and manage other unhealthy habits.

Try not to head to bed for several hours after eating dinner, since lying down can make symptoms worse. Relax after your last meal of the day, stay upright for 3 hours and try to avoid being completely stationary. For help with controlling flow of stomach contents, adjust your sleeping position. Sleep on a slight angle and raise the head of your bed 6 to 8 inches. You can do this by using a bigger pillow by placing lifters or blocks under your bedposts. Struggle to get good sleep many nights in general? Try exercising more during the day. Exercise may help you fall asleep more soundly and also has many benefits for digestive health including lowering inflammation.

Smoking cigarettes increases inflammation and impairs muscle reflexes that are important for controlling release of digestive contents. Smoking may also increase production of stomach acid. Avoid smoking if you are suffering from acid reflux.

High levels of stress can have devastating effects on digestion for some people. Stress can raise inflammation levels and alter gut health. It can also contribute to unhealthy habits like over-eating, eating lots of processed foods, eating too quickly, not getting enough rest, not exercising and skipping meals. You can help slow down symptoms of indigestion.  Eat smaller meals rather than large meals only 1-3 times per day. Eat more slowly, chew your food well and relax (in other words eat mindfully). Work on managing stressors in your life through practices like meditation, reading, exercise, spending time outdoors, etc.

The most important warning signs associated with a severe hiatal hernia risk include:  severe pain in the chest or abdomen (some say this feels “like having a heart attack”), sudden nausea and vomiting, lots of trouble breathing normally, feeling like you’re choking or wheezing, sudden and severe hoarseness in your voice, and severe constipation or painful bloating/gas. Talk to your doctor right away, or seek emergency care.