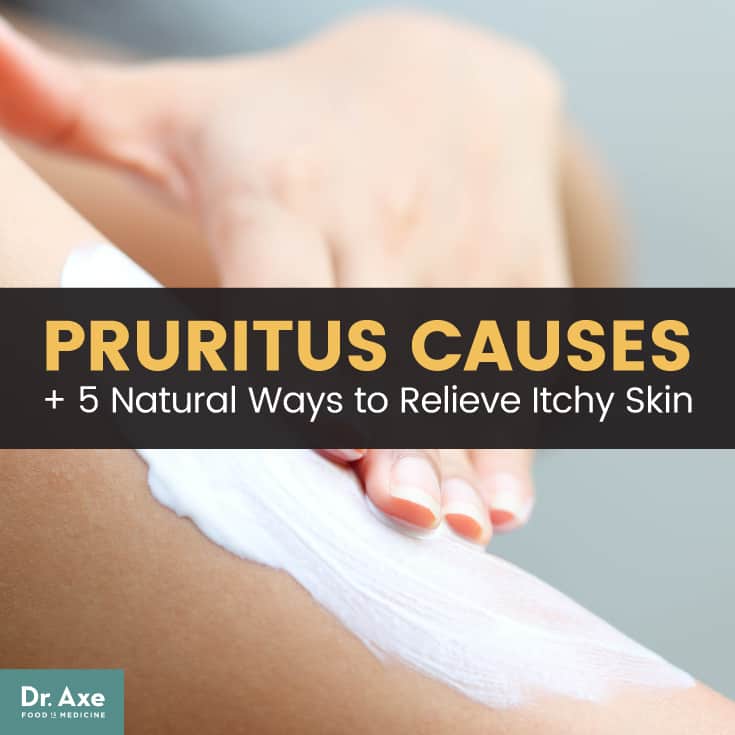 Pruritus, or skin itching, is a common skin problem associated with many different diseases — some of which only affect the skin and others that stem from underlying conditions affecting the whole body. Almost everyone will deal with skin itchiness, dryness and irritation at some point, but what makes pruritus different is its intensity and duration; it can cause intense urges to scratch the skin that sometimes last for many weeks or even months. (1)

Some describe pruritus as feeling like a frustrating, ongoing “itch that cannot be scratched.” Depending on how severe someone’s case is, pruritus can be very uncomfortable, even debilitating. Some people who experience intense itching — along with skin redness, swelling, blistering and edema (water retention) — can also suffer from decreased quality of life due to feeling embarrassed and frustrated by their condition.

Oftentimes pruritus is “idiopathic,” meaning it’s not exactly clear why the itchiness is happening. When someone’s doctor cannot figure out what’s causing their pruritus they will focus on treating their symptoms in order to reduce discomfort. Certain medications might be prescribed, including antihistamines or steroids, in some cases. Natural treatments for pruritus can also be very effective at providing relief from itching, including: colloidal oatmeal baths, essential oils, making dietary changes, and avoiding the use of irritating products.

Pruritus (pronounced pru·ri·tus) is another name for intense skin itchiness, which is associated with a variety of short-term and long-term health problems. The official medical definition of pruritus is “localized or generalized itching due to irritation of sensory nerve endings.” (2) There are many reasons why someone might experience pruritus, ranging from allergies and viruses like chicken pox, to liver disease and renal failure. (3)

Itchiness associated with pruritus might come and go or be chronic, lasting many months or even longer. One of the most frustrating things about having pruritus? Most of the time when someone with pruritus scratches their skin it will only become itchier and more uncomfortable, which might result in scarring or an infection.

Dermatologists distinguish between two over-arching types of pruritus: pruritus caused by a skin disease (such as allergies, contact dermatitis, eczema or a temporary rash), or pruritus caused by another disease that affects the immune system and/or the whole body (such as a thyroid disease, liver disease or autoimmune disorder).

If someone has pruritus that is NOT caused by a skin disease, then they commonly have normal-looking skin even though it still feels very itchy. They might experience changes in their skin due to scratching, such as scabbing or dryness, but they won’t have other symptoms typically associated with common skin problems like allergies, a rash, bug bites, etc. Once it’s determined that a skin disease is not the cause of pruritus then a doctor will need to do some investigating in order to find out what the patient’s underlying health issue is.

The most common pruritus symptoms include:

Symptoms of pruritus will differ from person to person depending on the underlying cause. 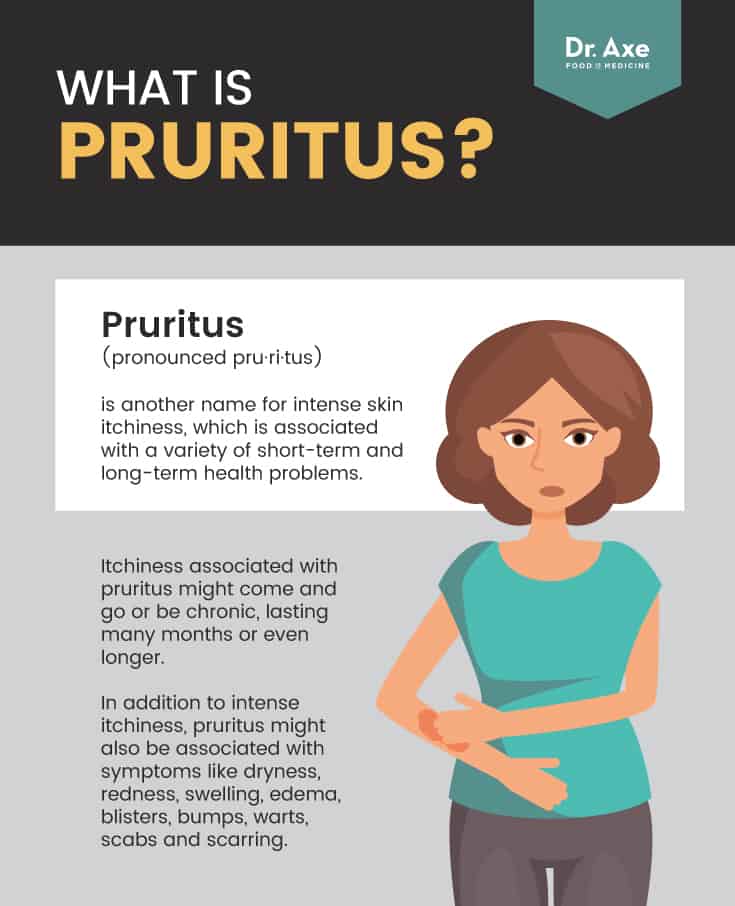 Experts believe that pruritus can be due to a combination of dermatological, psychological, and systemic causes. (4) To determine which type of pruritus someone has doctors will look for other signs of disease, infection or irritation — such as swelling, inflammation, hives, tingling, dryness, bites, bumps, etc. The goal is to determine if a temporary skin disease/infection is causing the pruritus, or if it’s due to an underlying health condition.

Research shows that pruritus incidence increases with age (it’s more common among adults and the elderly), is more common in women than in men, and affects people with light or sensitive skin most often, including Caucasians and those of Asian background. (5)

What causes pruritus? A number of conditions, both serious and not, can cause skin itchiness. Some of the most common causes of pruritus include: (6)

It’s believed that pruritus is due to complex underlying mechanisms. These have to do with itch signals being transmitted through itch-selective C-fibers in the skin, triggering histamine and non-histaminergic neurons, and changing sensory messages sent between the brain and the skin. It’s been found that people suffering from chronic pruritus usually experience peripheral and central hypersensitization (heightened reactions), which causes them to be easily triggered by stimuli and triggers such as climate changes, touch, environmental irritants and allergens.

Some of the more common subtypes of pruritus include:

Treatment for pruritus will always depend on what is causing the itchiness in the first place. If you visit your doctor regarding your pruritus symptoms, he or she will likely perform a number of tests to rule out certain health conditions. These tests can include: full blood panel, thyroid test, renal function, liver enzymes, bilirubin and bile acids.

Antihistamine medications or creams are commonly prescribed to patients with mild or moderate pruritus to help reduce itching. There are also new treatments in the works for pruritus, including those that target underlying pathways of inflammation. It’s now known that increased systemic inflammation, including abnormal cytokines, contribute to skin problems including itchiness. New treatments for pruritus work by targeting certain neuropeptides and helping to reduce the immune system’s reaction in other ways.

Medications that may be prescribed to manage pruritus include: (11)

When your skin becomes very itchy the first thing you’ll want to do is scratch it. But, unfortunately, this only makes the problem worse. Scratching will likely cause your skin to feel even itchier. Plus it can lead to scabbing and even permanent damage. This is the reason experts recommend working hard to “break the itch-scratch cycle.” If you leave itchy skin alone to heal and repair itself, the itching is more likely to go away or at least feel less intense.

2. Remove Triggers Including Allergens or Irritants

In order to prevent allergic reactions or irritation try to avoid using products on your skin that contain harsh chemicals, perfumes, dyes and drying agents. If you’ve recently started to use a new product and notice increased itching, then stop using the product to test if the itching gets any better.

Consider if your itching might stem from wearing synthetic or uncomfortable clothing; sleeping in an overly-heated room; sleeping on irritating sheets; wearing jewelry; taking too many hot baths or showers; or using commercial perfumed soaps, lotions, cleaning products, detergents, or cleaning products.

Adjust your environment so that your skin does not become overly dry, such as by minimizing use of indoor air conditions or heating systems and using a humidifier in your bedroom while you sleep. Before bed you can apply a natural, mild moisturizer to your skin to prevent dryness. Some of the best natural skin moisturizers include:

You can make your own homemade moisturizer for dry skin by combining:

Pour all of the ingredients into a mixing bowl and blend until the mixture is fluffy. Apply liberally to dry skin, then store in a glass jar for future use.

For the most relief, take short baths/showers with warm (but very hot) water. Then apply a moisturizer. When itching becomes very uncomfortable try gently applying a cool, wet compress to your skin. You might also want to cover your skin with wet bandages and dressings if you can’t keep from itching. Dermatologists often recommend using nonprescription hydrocortisone cream (containing at least 1 percent hydrocortisone) short-term on itchy skin. Topical anesthetics, such as pramoxine, and creams that contain capsaicin might also be helpful. If you have allergies and your skin is flaring up, you can try an over-the-counter (OTC) allergy medication such as diphenhydramine (Benadryl) temporarily, which is also helpful for helping you to sleep if itching keeps you up.

Ways that you can help reduce exposure to allergens and boost your overall immunity include:

Because there are so many different reasons why your skin might be itchy, many of which are not that serious and will usually go away on their own, it’s important to keep an eye on your symptoms and get help from a doctor if needed. It’s recommended that you visit a doctor — specifically a dermatologist who specializes in skin conditions — if you experience any of the following symptoms along with skin itchiness: Read Next: How to Remove Skin Tags Safely: 10 Natural Ways

What Crops Threatened by Extreme Weather

Almost half a million adults participated in a six-year study to determine ...
Read More
View All
Ad