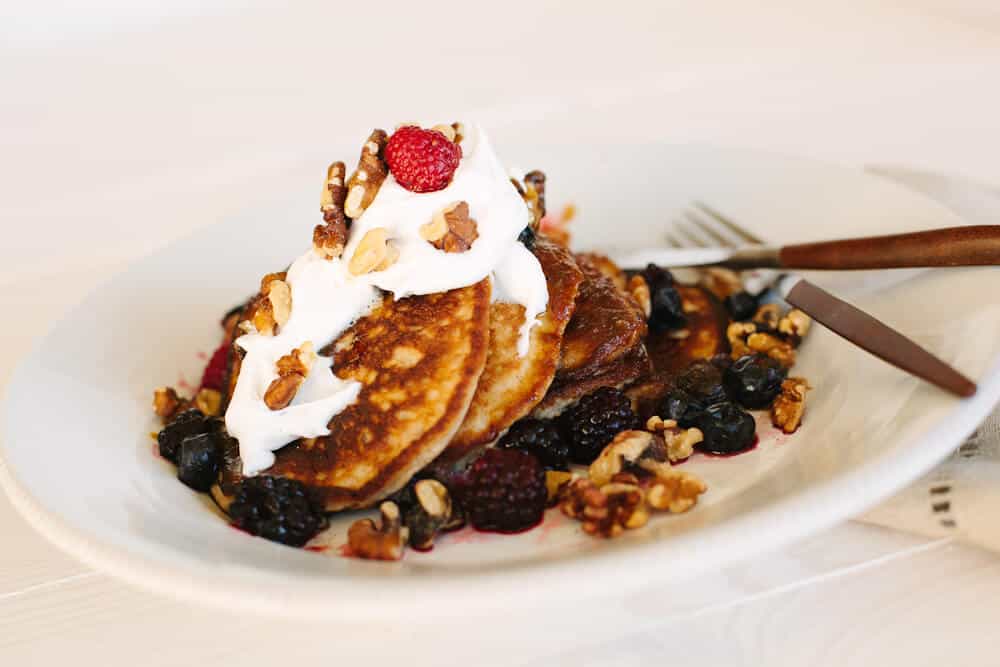 Who doesn’t love pancakes for breakfast, a weekend brunch, a snack or even a dessert? I know I enjoy them just about any time, but they have to be healthy pancakes, such as my Almond Flour Pancakes or Flour-less Pancakes.
Standard pancakes are trouble for most people because they consist of mostly refined carbohydrates, such as white flour and sugar, and wreak havoc on blood sugar levels. Plus, for those with gluten or dairy issues, they’re dominated by both of these no-no’s.
My healthy but still delicious (!) pancakes are grain-free, gluten-free and dairy-free. Instead, they’re made with the good-for-you ingredients almond flour and coconut milk! After all, almonds are loaded with nutrition: low in saturated fatty acids; rich in unsaturated fatty acids; and contain filling fiber, unique and protective phytosterol antioxidants as well as plant protein. Note: You can sprinkle nuts (such as walnuts, one of the great omega-3 foods) or fresh berries (many of which are high in vitamins such as vitamin C, some minerals, antioxidants and even some omega-3s) on your pancakes for extra nutrient-filled deliciousness. Yum! Unless you prefer to go dairy-free, you can also use grass-fed organic butter, or ghee, on your almond flour pancakes. (If you don’t wish to use butter or ghee, then there are non-dairy, non-GMO vegan alternatives such as earth balance® Omega-3 buttery spread.) Almond flour pancakes topped with just the nuts, berries, and butter or vegan butter option are healthy “eye candy” and brimming with good-for-you nutrition, for sure.

However, you can also go all out by adding other healthy, good-fat, scrumptious toppings, such as whipped coconut cream, and still be in the “safe zone” nutritionally. In fact, coconut cream and coconut milk nutrition is real, as both both contain the super-healthy medium-chain fatty acids (MCFAs) and contain necessary vitamins and minerals, so go ahead and indulge! No matter how you top them, though, you’re going to love these pancakes.