Are you in the market (fresh in most farmer’s markets right now!) for an eggplant rollatini recipe that is full of flavor and healthy ingredients yet is completely gluten-free? Well, then you have come to the right place!

Eggplant is often a forgotten vegetable even though it is so tasty and loaded with nutrients. You may think to order eggplant parmesan or even make a recipe for eggplant parmesan, but have you ever tried making any kind of rollatini?

While breadcrumbs aren’t included, let me assure you that this recipe leaves nothing to desire when it comes to flavor. Eggplant rollatini can be eaten as a main course for lunch or dinner. It can also be cut up into smaller pieces and with the simple of addition of a toothpick, it can instantly transform into a mouth-watering appetizer.

What Is Eggplant Rollatini?

Typically, eggplant rollatini is created by breading slices of eggplant and then stuffing them with a mixture of cheese. I’m not changing this recipe in so many ways, but I am leaving out the wheat flour and bread crumbs since so many people have a gluten sensitivity these days. If you really can’t imagine eggplant rollatini without the breading, then feel free to include gluten-free breadcrumbs or gluten-free flour in this recipe. This eggplant rollatini recipe is one of the healthiest Italian main dishes, and it’s also remarkably balanced between carbs, fat and protein, as you’ll see. It also contains more than 50 percent Daily Value of the vitamins A, B12 and K as well as the minerals phosphorus, riboflavin, calcium and manganese.

Vitamin K is associated with improved insulin levels, a reduced risk of cancer and protection against heart disease. Vitamin A is known for boosting eye, skin and immune system health.

Riboflavin actually helps your body turn the food you eat into much needed energy to function. Riboflavin is also essential for healthy growth and red blood cell production. Calcium and phosphorus are two key nutrients when it comes to bone health.

One serving of eggplant rollatini contains approximately the following: How to Make Eggplant Rollatini

The first thing you’re going to want to do for this recipe is preheat your oven to 450 F.

While your oven is heating up, cut the ends off of the two eggplants and then slice lengthwise. Now the fun part — when you actually roll up the eggplant! Place ¼ cup cheese mixture onto one end of the sliced eggplant, then roll it up and transfer it to the baking dish.

Continue this process until the baking dish is full. Cover the rolled eggplant slices with the remaining marinara and cheese. Cover the rolled eggplant slices with the remaining marinara and cheese.

Bake for 25 minutes and then allow the eggplant rollatini to cool for 10 minutes before enjoying. 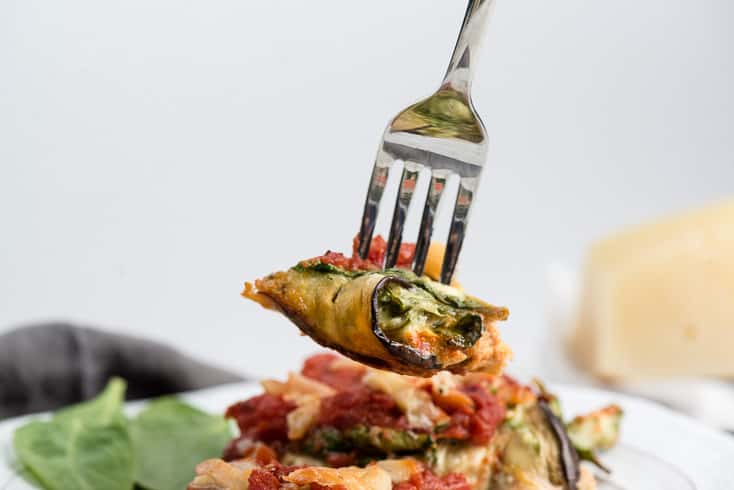 Not sure what to do with an eggplant? Try this eggplant rollatini recipe that is full of flavor and healthy ingredients yet is completely gluten-free.

If you haven’t seen kvass at the grocery store, chances are you ...
Read More
Dr. Axe on Facebook 276 Dr. Axe on Twitter 0 Dr. Axe on Instagram Dr. Axe on Google Plus Dr. Axe on Youtube Dr. Axe on Pintrest 119 Share on Email Print Article 417