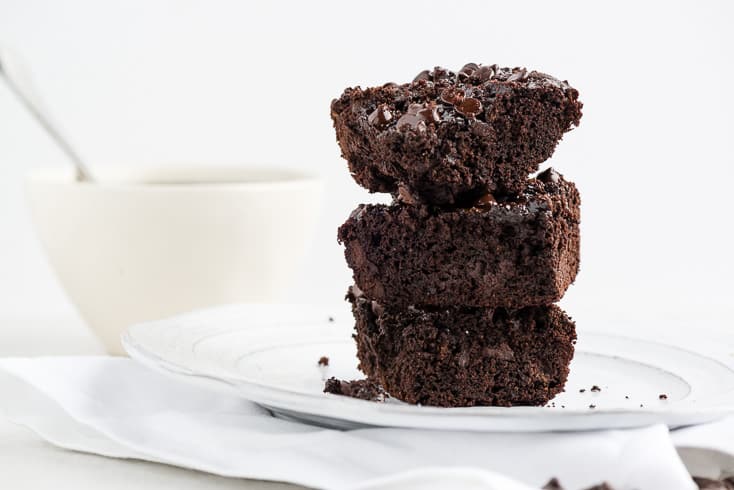 My coconut flour brownies are packed with antioxidants and healthy ingredients that boost energy levels and aid digestion. The combination of cacao powder, dark chocolate chips and maple syrup is rich and sweet — but heart-healthy too! And, the star ingredient of this recipe, the coconut flour, is gut-friendly and won’t leave you feeling drowsy an hour after eating these brownies.

I’m always looking for new coconut flour recipes because coconut flour doesn’t contain any grains, making it completely gluten-free. Plus, coconut flour is high in fiber, easy to digest and it doesn’t lead to blood sugar spikes like white, processed flour does. So, if your looking for a dessert that comes with a range of health benefits, look no further than these delicious coconut flour brownies.

Why You Should Swap Out Regular Flour for Coconut Flour

I’m excited that coconut flour is becoming easier to find in local supermarkets and health food stores because it’s one of my favorite gluten-free flours out there (along with almond flour). A major benefit of choosing coconut flour for your baking instead of regular, processed white flour is that coconut flour has a lower glycemic index, and it won’t lead to blood sugar highs and lows. Research shows that coconut flour is actually beneficial for patients with diabetes because it contains a high dietary fiber content and doesn’t alter blood glucose levels the way that regular flour does. (1) Coconut flour also aids your metabolism, energy levels and digestion.

And don’t worry. Making your chocolate brownies with coconut flour may make them a little more dense than traditional brownies, but it won’t take away from the desired fudgy texture and chocolatey taste.

One serving of this coconut flour brownies recipe (not counting the caramel sauce) contains roughly the following (2, 3, 4, 5): Other Key Ingredients in This Brownie Recipe

Aside from the number one ingredient in this recipe, the coconut flour, here’s a quick glance at some of the top health benefits associated with the other ingredients in my coconut flour brownies:

Dark chocolate: A little dark chocolate is more than just a delicious treat, it’s good for your health too. The benefits of dark chocolate include protection against disease, due to its antioxidant content, improved heart health, promoting healthy cholesterol and better brain function. Dark chocolate also has a richer flavor than milk chocolate because of its cocoa content. (6) Cacao powder: Cacao is considered a superfood because it contains powerful bioflavonoids that have been shown to exhibit anti-inflammatory, anticancer, antidiabetic and neuroprotective properties. When added to smoothies, baked goods and trail mixes, cacao nibs and powder help to maintain muscle and nerve function, reduce the risk of heart disease, correct digestive issues and boost your mood.

Coconut sugar: Coconut sugar is one of my favorite natural sweeteners. It comes from the sap of the coconut tree and is then dried to form sugar. Coconut sugar contains the same amount of calories as granulated sugar, so you don’t want to eat a ton of it, but it also provides trace minerals and antioxidants, making it the healthier choice.

How to Make Coconut Flour Brownies To make these delicious coconut flour brownies, start by preheating your oven to 350 degrees Fahrenheit and take out one bowl for mixing your ingredients. First, mix your wet ingredients, which includes 4 eggs, ½ cup maple syrup, 1 tablespoon vanilla extract and ⅓ cup of coconut oil. Stir until all of the ingredients come together. Pour the mixture into a greased 8×8 brownie pan, top it with chocolate chips and nuts, if you’d like and bake the brownies for 25–30 minutes. After letting your coconut flour brownies cool, drizzle on some of my caramel sauce that’s made with coconut milk, maple syrup, coconut sugar, coconut oil and vanilla extract. And just like that, your gluten-free and gut-friendly brownies are ready to enjoy! Even those picky eaters in your life who don’t love trying gluten-free recipes will want these coconut flour brownies.

Thinking of new ways to get your family to eat veggies can ...
Read More
Dr. Axe on Facebook 50 Dr. Axe on Twitter 22 Dr. Axe on Instagram Dr. Axe on Google Plus Dr. Axe on Youtube Dr. Axe on Pintrest 93 Share on Email Print Article 165

This strawberry shortcake cupcakes recipe includes only the best ingredients, and it’s ...
Read More
View All