You may have noticed a new food trend recently: black everything. From dark lemonades to coal-like pizza crusts, darkened foods are popping up everywhere. What’s giving these foods their dark hue is activated charcoal, and, I have to admit, it’s a fad I’m into.

What Is Black Ice Cream?

As you can tell from the ingredients list, not only is this activated charcoal ice cream super healthy, it’s also dairy-free! You can even swap the honey for an alternative sweetener like maple syrup to make this black charcoal recipe vegan, too.

Unfortunately, you’re not likely to see black ice cream alongside vanilla ice cream in your local ice cream shop, but thankfully it’s not hard to make what I think is one of the finest ice cream flavors in existence today. How did this seemingly goth ice cream get its start? You’re about to find out!

Black ice cream doesn’t have a lengthy history, but it has a story nonetheless. The ice cream parlor that typically gets credit for starting the black ice cream trend is Morgenstern’s Finest Ice Cream, located in New York City. It was somewhat of an accident too. The main goal actually was not to create a healthy and black colored ice cream, but rather to create a flavor that was coconut to the max! In 2016, this modern day ice cream parlor debuted a new and very intriguing option: coconut ash.

Why is it called coconut ash? This jet black ash ice cream gets its name from its key ingredient, which, according to founder Nick Morgenstern, is “simply the charred and processed remains of a coconut shell.” This coconut ash is a form of activated charcoal, and its why the final product ends up being such a rich, dark shade. How dark? Seriously, this ash ice cream is truly as black as you can imagine, yet it contains some very lightly colored and tasty ingredients, including coconut flakes, coconut cream and coconut milk, similar to the delicious recipe below. (1)

Now, when you think of ice cream, “healthy” probably isn’t the first word that comes to mind. But the ingredients in this activated charcoal ice cream make it a guilt-free treat.

Let’s start with the main ingredient: activated charcoal. It’s a powerful detoxifier that’s often used in hospitals to treat patients who have overdosed or poisoned themselves. (2)

The charcoal binds to toxins and chemicals and draws them out of the body. The best types are made from coconut shells or identified wood species with fine grains and don’t have added artificial sweeteners. Activated charcoal is handy to have in the medicine cabinet as it helps alleviate gas and bloating and can even help the morning after too many cocktails. (3) You can use it to whiten your teeth; in fact, you’ll find it in many natural toothpastes. It also promotes a happy digestive tract.

One of the most versatile kitchen staples, coconut milk, is featured in this black ice cream recipe. Coconut milk gives this dessert a creamy texture and a little natural sweetness. It’s also known to lower bad cholesterol levels and help you lose fat. (4, 5)

Cacao powder is a type of dark chocolate, so it’s packed with antioxidants. In fact, dark chocolate is often considered a superfood and helps lower blood pressure and increases blood flow to the heart. (6)

And instead of refined sweeteners, this black ice cream recipe uses honey, a natural sweetener option. Honey is full of enzymes, antioxidants and minerals that you just don’t get with table sugar. It’s also a lot easier on your blood sugar levels.

Activated charcoal has no calorie count, but how does the rest of this black ice cream stack up? One serving contains about: (7) 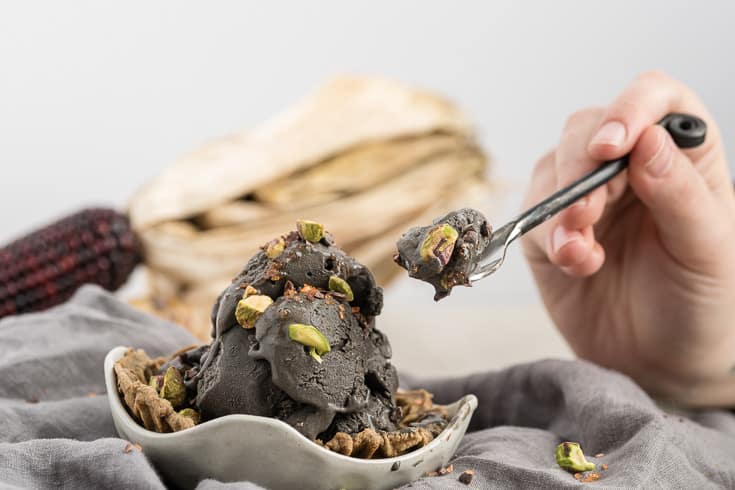 How to Make Black Ice Cream

Intrigued about making this activated charcoal ice cream? It’s pretty easy to do, so let’s get churning.

You’ll want to pre-plan this charcoal recipe and stick your ice cream maker’s freezer bowl in the freezer for about nine hours; I find it’s easier to just place it overnight. The next day, put a medium saucepan on the stove and add the coconut milk, condensed coconut milk, arrowroot starch, honey, vanilla extract, cacao powder and activated charcoal. Keep watch over it so it doesn’t come to a boil. Next, pour the black ice cream mixture into a bowl. Cover it and place in the refrigerator for at least an hour before making the ice cream. Assemble the ice cream maker and turn on the rotating freezer bowl. Next, pour the black ice cream mixture into the bowl and churn for 15–20 minutes or until the ice cream reaches your desired consistency. If you’re a fan of thick ice cream, pour the mixture into a container. Cover it with parchment paper and store in the freezer for about an hour. Then scoop the ice cream into a bowl. Serve the black charcoal ice cream with your favorite toppings. Have you ever tried making a homemade pumpkin seeds recipe? Not only ...
Read More
Dr. Axe on Facebook 45 Dr. Axe on Twitter 1 Dr. Axe on Instagram Dr. Axe on Google Plus Dr. Axe on Youtube Dr. Axe on Pintrest 134 Share on Email Print Article 180