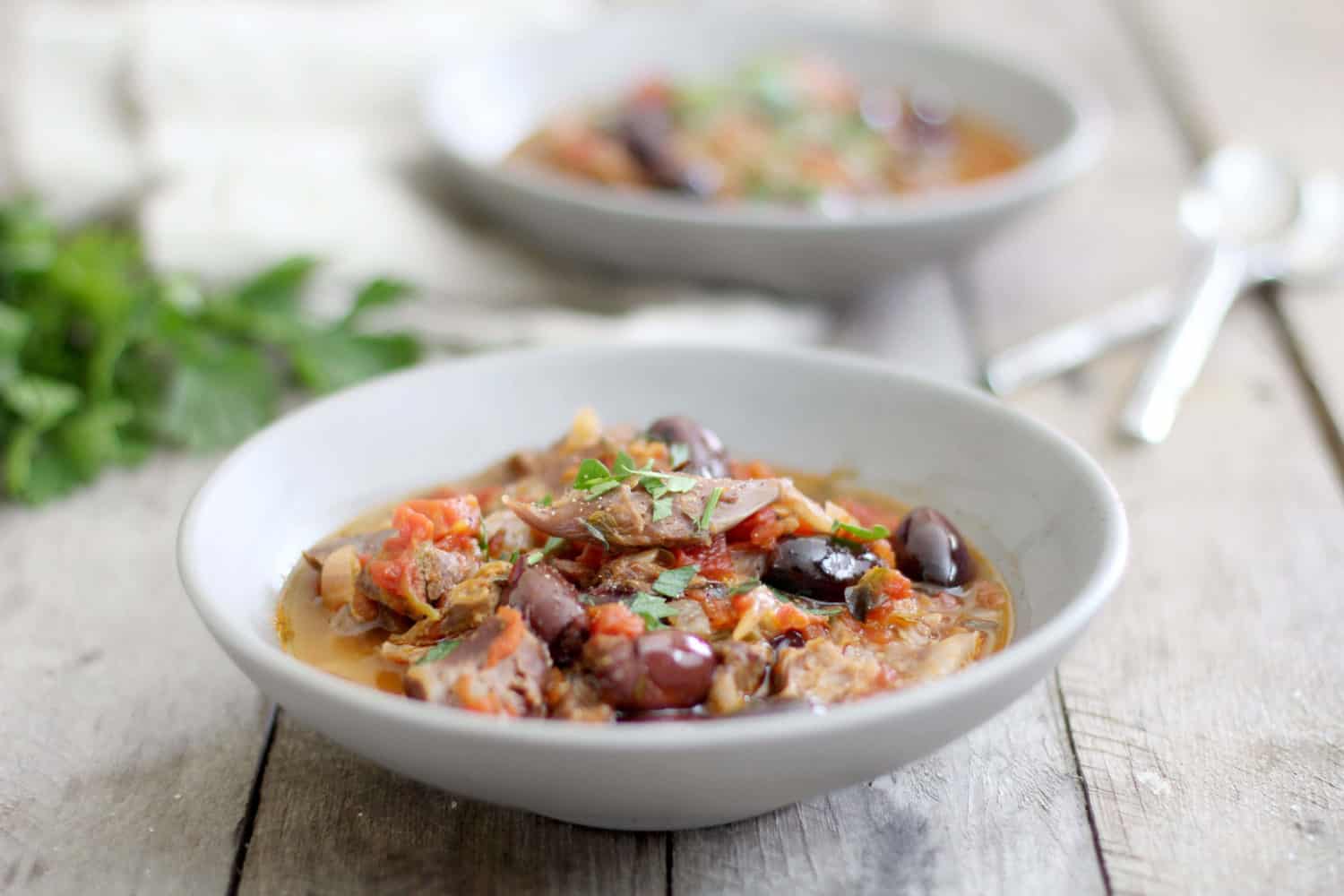 As the weather cools down, I love warming up with a good ole stew. Most people turn to a slow-cooker chili or classic beef stew, but I have a recipe that’ll bring new life into winter evenings: lamb stew.

This lamb stew might have a few steps, but it’s really quite simple and includes lots of hands-off cooking time. If you’re thrown by the “bouquet garni,” don’t be! It’s a fancy way of saying “bundle of herbs.” The fresh herbs are tied together with string and added to soups, stews and casseroles to impart loads of flavor, then removed before serving.

Many folks shy away from cooking with lamb meat because it’s not as common in recipes as, say, chicken. But as one of the top 10 Biblical foods, lamb meat is great for us both spiritually and nutritionally. It’s the most revered animal in history and its meat is naturally rich with protein, vitamins and minerals. It’s also a rich source of healthy fats like omega-3 fatty acids and CLA.

In fact, one serving of this stew delivers over 100 percent daily value of protein (55 grams!), vitamin B12 and zinc.

For this recipe, I suggest sticking to grass-fed, local meat if possible. Otherwise, at store like Trader Joe’s, they carry New Zealand lamb, considered one of the premiere places to raise lamb.

How to Make Lamb Stew

If you’re ready for a cozy meal that’s different from anything you’ve made before, easy to make and perfect for company, it’s time to dig into this lamb stew. Let’s kick things off by adding your choice of broth, water, canned tomatoes (go BPA-free!), tomatoes, onion and homemade bouquet garni to a large pot over medium-high heat and covering it.

What is bouquet garni? It’s simply around a quarter-cup of dried parsley, two tablespoons dried thyme, and one tablespoon dried and ground bay leaf (or 2 whole dried bay leaves). Sometimes rosemary is added as well. When you bundle up these herbs, it also makes for easy removal.

Next, add ghee, excellent for cooking at high temperatures, in a large skillet until the fat is shimmering; that means it’s hot enough. If you don’t have ghee, simply use grass-fed butter. Add in the lamb shanks and sear for 3 minutes on each side, just long enough to give them a nice color.

Then, remove the lamb from the pan and add it into the pot with all the other delicious lamb stew ingredients. Next, add in cut up Yukon Gold potatoes. Bring the pot almost to a boil, and then reduce the heat and let it simmer for the next 2 hours.

Grab your fresh lemon halves next and squeeze the juice into the pot; watch out for seeds! Then toss in the lemon halves and the olives right into the pot. Let them work their magic for the next 15 minutes. Time’s up! Remove the pot from the heat and let the lamb stew rest for 15 minutes before removing the bouquet garni and tossing it out. Pull the lamb off the bones and toss the meat back into the pot. Either discard the remaining bones or (my choice!), save them for making a homemade stock.

Pro tip: This lamb stew recipe is easily adaptable for crockpot cooking, too. Set it up in the morning and dinner will be ready before you know it.

Add in the ingredients, including the seared lamb, into a crockpot and cook on low heat, covered, for 8 hours. Then, add the lemon juice, lemon halves and olives, cover the pot again and remove from heat. Discard the bouquet garni and pull the meat off the bones before serving.

This lamb stew might have a few steps, but it’s really quite simple and includes lots of hands-off cooking time. If you’re thrown by the “bouquet garni,” don’t be! It’s a fancy way of saying “bundle of herbs.”

You can also use the same ingredients and make a slow cooker lamb stew. Place all these ingredients in a crockpot on low, add the lamb after searing it, and cook covered for 8 hours. Add the lemon and olives, cover, turn off the heat, remove bouquet garni and pull apart the meat before serving.

Greece is known for its whole-food based Mediterranean diet that is impressively healthy and ...
Read More
Dr. Axe on Facebook 38 Dr. Axe on Twitter 2 Dr. Axe on Instagram Dr. Axe on Google Plus Dr. Axe on Youtube Dr. Axe on Pintrest 135 Share on Email Print Article 175